Greenwood, a World On Fire 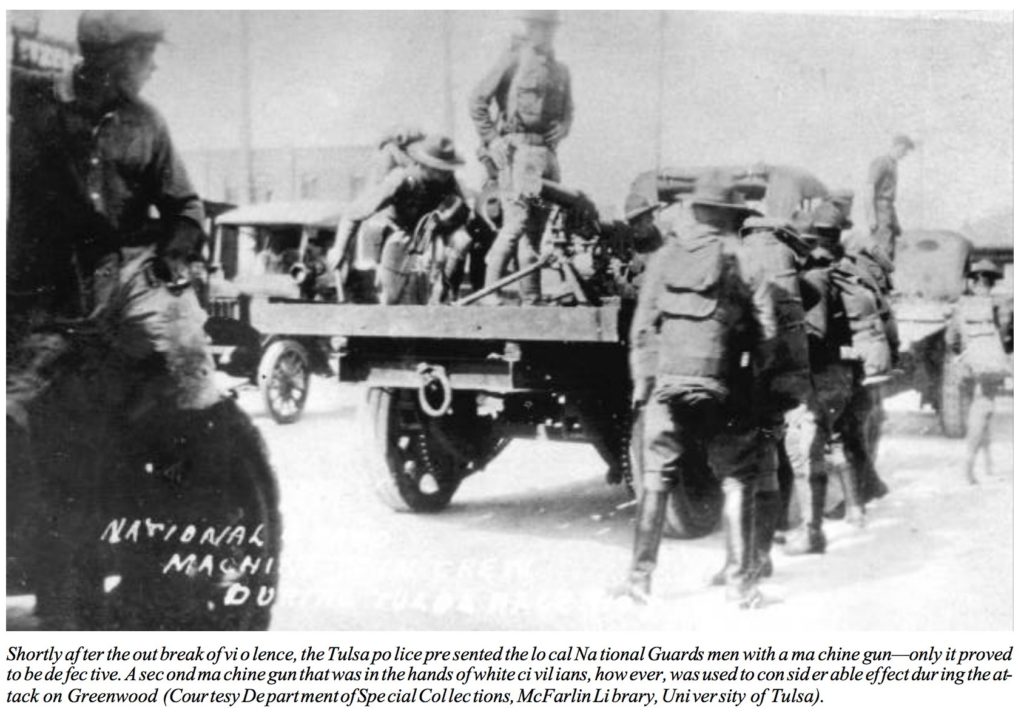 On May 31, 1921, Dick Rowland, a 19-year old black man was arrested on charges of assaulting a white woman. The white community activley called for a lynching and the black community met at the Tulsa courthouse to prevent that from happening. That evening, State National Guardsmen were called in by the City of Tulsa to respond to escalating violence, which the city called a “Negro uprising.”[1] Sometime after 11:00 p.m., twenty Guardsmen arrived at the police station, where they had set up headquarters. They guarded the border between White Tulsa and the African American Greenwood District for several hours.

Between the hours of 1:00 a.m. and 2:00 a.m., J.B.A. Robertson, the Governor of Oklahoma, declared martial law throughout Tulsa County. The Guard, which had been instructed by the Governor to protect Greenwood residents and restore order, instead joined the rioters, acting “like wild men.”[2] This White mob, containing newly deputized members of the police department and Guardsmen, outnumbered and shot the African American men stationed at Paradise Baptist Church.

The newly deputized members of the Tulsa Police Department, County Sheriff’s office, City, Chamber, and County officials also committed arson on almost fifteen hundred Greenwood residents’ homes and businesses. One witness, Judge John A. Oliphant, testified that, “Instead of protecting property, they were the chief fellows setting fires.”[3] Those fires completely engulfed Greenwood, so much so that Massacre survivor Alice Andrews stated, “It looked the world was on fire.”[4]

Before setting fire to the residences and businesses of Greenwood, the white mob carefully stripped and looted homes and businesses of all valuables. The heartbreaking experience of Massacre survivor Dr. Robert Bridgewater and his wife, Mattie, who lived at 507 N. Detroit paints a harrowing picture of the savagery of the white rioters:

Returning to his home — after being held at Convention Hall — in order to retrieve his medicine cases, Dr. Bridgewater later wrote, “On reaching the house, I saw my piano and all of my elegant furniture piled in the street. My safe had been broken open, all of the money stolen, also my silverware, cut glass, all of the family clothes, and everything of value had been removed, even my family Bible. My electric light fixtures were broken, all of the window lights and glass in the doors were broken, the dishes that were not stolen were broken, the floors were covered (literally speaking) with glass, even the phone was torn from the wall.”[5]

Airplanes, including those owned and operated by Sinclair Oil Corporation, were used to track down and menace, shoot at and kill Greenwood residents, as well as relay their location to the white mob’s ground forces, and drop incendiary materials and bombs on the streets, homes, businesses, and people of Greenwood.

Brigadier General Charles F. Barrett, who was in charge of the National Guard brigade, stated that, on the morning of June 1, 1921, he witnessed a rioting white mob in Greenwood, which was by now on fire. The National Guard marched through the crowded streets.  Brigadier General Barrett described scared and partially clothed African American men, women, and children paraded through the streets under heavily armed guard. He later wrote that, “In all my experience, I have never witnessed such scenes that prevailed in this city when I arrived at the height of the rioting 25,000 whites, armed to the teeth, were ranging the city in utter and ruthless defiance of every concept of law and righteousness. Motorcars bristling with guns swept through your city, their occupants firing at will.”

Maurice Willows, who was then the Director of the local Red Cross, stated that, “All that fire, rifles, revolvers, machine guns, and inhuman bestiality could be done with 35 city blocks with its 10,000 Negro population, was done.”[6]  By 11:00 a.m. on June 1 the shooting ceased. Innumerable African American Greenwood residents had been killed, placed in “protective custody,” or driven out.  Even after the Massacre ceased, the newly deputized white citizens were told that they were to “go out and shoot any nigger you see, and the law’ll be behind you.”[7]

[1]       The Massacre was falsely called a “Negro Uprising” by Defendants.